This book is based on collections of papers presented at the international seminar on ‘Environmental change in native and colonial histories of Borneo; Lessons from the past, prospects for the future’, held in Leiden, the Netherlands in August 2000. The Borneo environment and peoples have been seriously affected by recent development of oil palm plantations, continued logging and mining, devastating forest fires and controversial transmigration. This book takes a historical look at these changes as well as continuity in Borneo environment and societies “from native, colonial and national perspectives” (p.1).

It is however slightly regrettable that authors consist only of scholars in the US, Europe and Australia, who have been working on Borneo with anthropological, socio-ecological, historical and interdisciplinary approaches. Neither local scholar in Borneo nor Southeast and East Asian researcher contributes to this book despite not a few Asian scholars working on Borneo. This book therefore not only depicts histories of human-environment interactions in Borneo but connotes “western” scholarly views, reconsiderations and challenges of studying “native and national” perspectives concerning the Borneo environment. 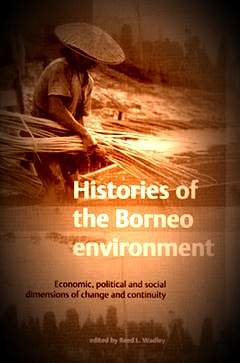 The book consists of three parts. The first part depicts history of practices and/or ideas held by traders mainly Chinese (the first essay by Tagliacozzo), indigenous people extracting forest resources for profit as well as livelihood (the second and third essays by Sellato and Eghenter) and colonial state foresters exploiting forest and plantation products (the fourth essay by Potter). These essays reveal that not only traders but also foresters and even local people did not take the ideas of conservation and sustainability into consideration seriously as long as the resources did not have local subsistence value but had trade and commercial value.

The second part illustrates the process of colonial and post-colonial state rule over the Borneo land, people and knowledge of environment. In particular, it deals with the process of boundary-making and territorialization (the fifth essay by Wadley), discourse-making of ‘traditional, primitive and backward’ interior people by state officers (the sixth essay by Doolittle) and changes in western views of the upas tree from the uncontrollable fearsome poison plant to a curious scientific object after Dutch control was accomplished in the region (the seventh essay by Dove and Carpenter).

The last part is concerned with transformations in the inland local societies, focusing on the Rungus of Sabah, who were largely swidden agriculturalists (the eighth essay by Appell) and the Kelabit Highlands of Sarawak, who traditionally grow rice in both dry and wet fields (the ninth essay by Janowski). They show a contrast between the swidden agricultural society and the wet rice cultivation society with regard to impacts of colonial and post-colonial state schemes. The introduction of landownership and the development of plantations had negative impacts on the Rungus, such as the erosion of village land right and the swidden areas, social dismemberment and weakening a traditional social organization while the Kelabit Highlands adjusted well and even benefited from state projects such as modern education and infrastructure development as well as cash-oriented economy through an export of their ‘Bario rice’ which has good commercial value in urban areas. The last essay by Saunders is a concluding section of this book with a mention of the myth, highlighting the changes and continuities in perceptions of the Borneo environment held by indigenous, Arab, Chinese and Europeans.

With the purpose of a comprehensive study, this book is characterized by cross-country and interdisciplinary approaches to various subjects concerning the Borneo environment and social histories. It is, however, fairly disappointing that none of the authors refers to original Chinese documents and materials while they make good use of Dutch and British archival materials as well as Indonesian and Malay documents, and also have conducted fieldwork and interviews with local people. Not a few books and articles on Chinese societies in Borneo, referring to Chinese documents, have been published. They would contribute to more comprehensive study of the Borneo histories. Besides, some of the authors deconstruct colonial and post-colonial state discourse on local people and their ways of land use, and argue in favor of the role of adat (local customary laws) in promoting sustainable resource management. These views that idealize adat should be reconsidered carefully because adat deals with not only the resource management but social relations, some of which might be difficult to be accepted in present local society.