On the 8th of October, 2002, members of different non-governmental organizations and student groups met at the headquarters of the modernist Muslim organization Muhammadiyah in central Jakarta to set off on an anti-war demonstration outside the U.S. Embassy. The numbers trickled in. While concern mounted in the preceding weeks about what appeared to be an impending U.S. attack on Iraq, anti-war protests were only getting started.

Nong Darol Mahmada, a member of the Liberal Islam Network (Jaringan Islam Liberal), was a key organizer of the demonstration. She endured a wait of a few hours, unsure if the expected inter-religious coalition would come together as she hoped and if the busloads of students already on their way would make it through the city’s notorious jams. In the end, while the inter-religious representation was not as strong as it could have been, the students did arrive and the march on the U.S. Embassy began.

The demonstration enjoyed a police escort throughout the journey of some forty minutes through some of Jakarta’s busiest districts. More than 200 people came together as the marchers approached the U.S. Embassy, they were funneled through a line police officers on one side and journalists and onlookers on the other.

The U.S. Embassy was heavily guarded. Traffic was diverted to some 20 meters away from its front gates while police officers and armored vehicles were placed in strategic locations. Throughout the initial stages of the protest, the police maintained a tight defensive line. The police nevertheless handled the demonstrators with professionalism and even curiosity if not friendliness, a clear product of the democratization processes at work since 1998.

That women constituted a substantial, if not majority, share of the intellectual leadership of the protest was clear. A woman read the declaration prepared in advance. Women’s voices were evident on the placards carrying a variety of anti-war messages. Women were visibly significant amongst the marchers and in the small delegation led by Muslim leader and writer Ulil Abshar Abdalla which presented the declaration to Embassy officials.

The protests were marked by a measured and focused anger, and even lightness, against the heavy defenses on the perimeter of the Embassy. What more with the police swelling the numbers of attentive listeners rather than taking an aggressively defensive posture.

Just over four days later Bali was shaken by bombs. 202 people were killed.

Soon afterwards, security was intensified in unprecedented ways. At the time of writing, a trip to a shopping mall requires baggage checks for pedestrians and vehicle inspections for drivers. The bombing in Bali neither helped efforts by Indonesians to fight U.S. aggression by peaceful means, nor did it mitigate the terribly poor opinion of the Bush administration held by many in the country. The war in Iraq that eventually ensued merely fueled more and angrier protests.

On October 8, 2002, the protesters made clear their indignance at the Bush White House and their affection for Americans as a people. Those who planted the bombs in Bali made no distinction between citizens and governments. The decline if not the end to political violence does not hinge, as media commentators like to claim, on the “soul of moderate Islam in Indonesia.” Islam in this country is no more moderate or extreme than any other religion. Peaceful resolutions rest more on greater numbers of Muslims seeing the difference between regimes such as the Bush White House and a diverse citizenry.

he small demonstration is noteworthy if nothing else for preserving in memory the capacity of indignant and intelligent Indonesians of different faiths to seek peaceful options and resolutions to the violent path taken by the Bush regime. 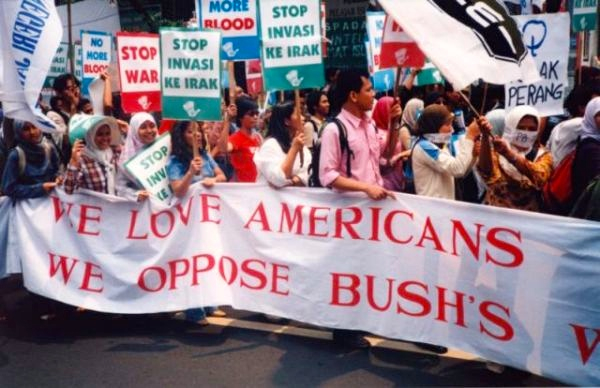