The economic crisis of 1997 affected everyone in Thailand, even His Majesty the King. Seeing many of his subjects suffering, he advised the Thai people to change their economic philosophy in order to cope with present economic adversity and withstand future economic insecurity. His Majesty’s words have become known as the Philosophy of Sufficiency Economy and have been used as the guiding principle in drafting the current 9th National Economic and Social Development Plan.

The philosophy can be summed up in one paragraph, as translated from the Thai:

“Sufficiency Economy is a philosophy that guides the livelihood and behavior of people at all levels, from the family to the community to the country, on matters concerning national development and administration. It calls for a ‘middle way’ to be observed, especially in pursuing economic development in keeping with the world of globalization. Sufficiency means moderation and reasonableness, including the need to build a reasonable immune system against shocks from the outside or from the inside. Intelligence, attentiveness, and extreme care should be used to ensure that all plans and every step of their implementation are based on knowledge. At the same time we must build up the spiritual foundation of all people in the nation, especially state officials, scholars, and business people at all levels, so they are conscious of moral integrity and honesty and they strive for the appropriate wisdom to live life with forbearance, diligence, self-awareness, intelligence, and attentiveness. In this way we can hope to maintain balance and be ready to cope with rapid physical, social, environmental, and cultural changes from the outside world.”

This philosophical statement has lent itself to interpretation by diverse groups of people. First, we can dismiss outright the extreme interpretation that the Sufficiency Economy means complete self-reliance or autarky. In an autarchic system, a country or unit thereof relies upon itself and its people to produce all its needs with no dependence on others. It may do this voluntarily (cutting off contacts with the outside world) or by necessity (because it is incapable of generating those contacts). But His Majesty the King explicitly rejected this interpretation: “This self-sufficiency does not mean that every family must grow food for themselves, to make clothes for themselves; that is too much. But in a village or sub-district there should be a reasonable amount of sufficiency. If they grow or produce something more than they need they can sell them. But they do not need to sell them very far; they can sell them in nearby places without having to pay high transport costs.”

Some people have attempted to link this economic philosophy with the so-called “Gandhian Economy.” Along the lines proposed by Mahatma Gandhi, this is an economy based on family-level or village-level small-scale enterprises and traditional methods. It may have been appropriate to India in the mid-twentieth century, when the people were poor and technology was limited. But in the present, it may be too restrictive to expect families to do everything by themselves using simple tools and machinery, such as traditional spinning wheels to make cloth. Perhaps the basic idea of Gandhian simplicity – a life less encumbered by modern needs and modern technology – could make people happier. But in the very open world of today, self-sufficiency a la Gandhi is too extreme.

We also hear people relating the Sufficiency Economy to the knowledge and applicability of Buddhism. In Buddhism, life, especially spiritual life, is enhanced by cutting out excessive wants and greed. True happiness may be attained when a person is fully satisfied with what he or she has and is at peace with the self. To strive to consume more leads to unhappiness if (or when) consumption is not satisfied or falls short of expectations. A sufficiency economy in this context would be an economy fundamentally conditioned by basic need, not greed, and restrained by a conscious effort to cut consumption. This is probably acceptable insofar as it does not reject gains in welfare and well-being due to greater consumption. 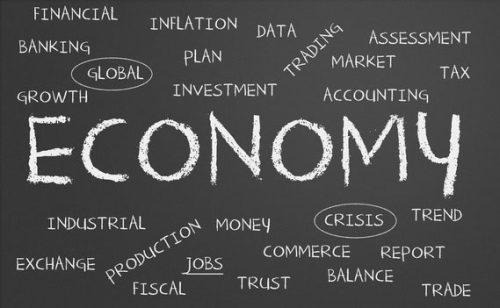 Looking back, it can be seen that His Majesty has talked about the sufficiency idea since 1974. In his customary birthday speech of that year, he wished everyone in Thailand “sufficient to live and to eat” (Por You Por Kin). This was indeed a precursor to the sufficiency economy. His Majesty also said: “The development of a country must be by steps. It must start with basic sufficiency in food and adequate living, using techniques and instruments which are economical but technically sound. When this foundation is secured, then higher economic status and progress can be established.” (See Apichai Puntasen, “The King’s Sufficiency Economy and Its Interpretation by Economists,” prepared for the 1999 Year-End Conference of the Thailand Development Research Institute (TDRI), Pattaya, 18-19 December 1999.)

Still, there are attempts by various segments of the Thai population to dissociate this new economy from the realm of mainstream economics that stresses economic rationality and efficiency in resource allocation. It is obvious that His Majesty’s Sufficiency Economy is not the type found in a mainstream economics textbook, but it would be inaccurate to interpret it as the antithesis of mainstream economics in every respect. On the contrary, I think we can understand Sufficiency Economy within the framework of economic rationality and efficiency in allocative choices. The difference is not in type, but in degree or magnitude of economic behavior. His Majesty used the phrase “middle path” or “middle way” to describe the pattern of life every Thai should lead – a life dictated by moderation, reasonableness, and the ability to withstand shock. Can we find something in mainstream economics that captures the spirit of this philosophy?

I propose to use my own understanding of economic optimization. It is possible to see the Sufficiency Economy as consisting of two frameworks. One is the inevitability of facing the globalized world in which economic efficiency and competition are the rules of the game; the other is the need for economic security and the capacity to protect oneself from external shock and instability. Thinking within the first framework – the basic tenet of mainstream economics – we must realise the opportunity costs involved in every decision we make. We gain from specialization and division of labor because the opportunity costs of doing everything by ourselves is much higher. The laws of comparative advantage and gains from trade are at work in today’s world. But it would be foolish to pursue all-out specialization without basic security, especially in food, shelter, and clothing. This is where the framework of the new Sufficiency Economy comes in. This concerns the basic capacity of the people of a country to look after themselves. The optimization principle applies when we seek to answer the question: How much of our time and energy should be devoted to the first and second frameworks, respectively? In other words, how much resources should be allocated to producing for trade based on comparative advantage principle, and how much for basic security? The best mix between the two allocations would represent the optimal state of affairs, both in mainstream and Sufficiency Economics.

Medhi Krongkaew
The author is professor of economics at the School of Development Economics, National Institute of Development Administration (NIDA).