Title: Power, Protection and Magic in Thailand: The Cosmos of a Southern Policemen, by Craig J. Reynolds
Canberra: ANU Press, 2019

The trend towards the serious scholarly study of Thailand’s regions is well over four decades old now, but different regions have attracted different degrees of attention. Most studied (by far) is the north, followed by the northeast. Scholarly works on southern Thailand, by comparison, are much fewer, and these studies are disproportionately weighted to the conflict in the southern border provinces and its majority Muslim population. Studies of the predominantly Buddhist “upper south” – the region stretching approximately from the province of Surat Thani through to Songkhla, are exceedingly rare. Craig Reynolds’ Power, Protection, and Magic in Thailand: The Cosmos of a Southern Policeman is therefore a welcome addition to research on this sparsely studied region.

Throughout his long and illustrious career as a historian of Thailand Reynolds has constantly changed his interests and approach. This book represents yet another shift. It is his first attempt to focus on a regional topic. It is, at the same time, something of a homage to the region of the country he first encountered over half a century ago, when he was a Peace Corps volunteer teacher at a school in Krabi province on the shores of the Andaman Sea (p. xv). While the geographical focus differs from his earlier work, the reader will instantly recognize the hallmarks of Reynolds’ style as a historian: his interest in the life stories of Thais as individuals, in social history, in Buddhism and indigenous cultural traditions, in forms of masculinity, in the relationship between the Thai state and society, and in the emergence of the nation-state. 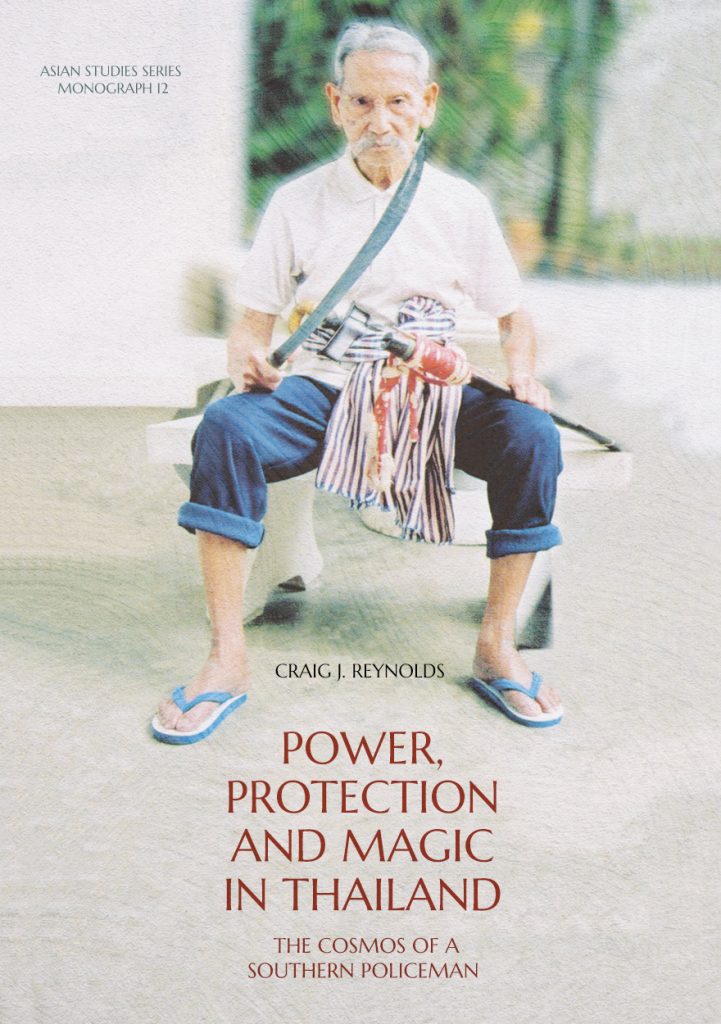 The subject of the book is the career of the famous southern Thai policeman, Khun Phantharakratchadet (1898? – 2006). 1 The policemen is famous not only for his exploits in suppressing crime – he was responsible for killing 62 criminals over the course of his career (p. 6) – but also for his use of the “dark arts” of black magic in his pursuit of criminals. At the end of his career he was involved in the production of a famous amulet, the Jatukham Ramathep, which for a brief period around the time of his death became the most sought-after amulet in Thai history. Around the career of this unusual policeman Reynolds crafts an absorbing social history of southern Thailand which explores the rich lore of black magic (known in Thai as saiyasat), the history of policing, masculinity and violence, and the Thai state’s taming of this wild part of the country. The story is set against the “watery world” (p. 67) of the mid-south, where the peninsula’s unique environment of towering limestone outcrops, caves, swamps, lakes, lagoons, canals, and jungles, divided down the centre by mountain ranges, created ideal conditions for lawlessness and banditry. As Reynolds shows (pp.71-4), due its location adjacent to both the Straits of Melaka and the Gulf of Siam this region has historically been exposed to successive waves of external cultural influence: Brahmanism, Buddhism (both the Mahayana and Theravadin schools), Islam, Chinese migration, as well as the more recent Western colonial presence. The cultural traces left by each of these civilizational waves add another layer of complexity to understanding the south.

The picture of the south in the early twentieth century that emerges from the book is of a wild and violent region integrated only loosely into the Thai kingdom. Khun Phantharakratchadet, though a native of the largest province of the south, Nakhon Si Thammarat, became, in effect, an agent of the Thai state (pp. 5, 25). The literal translation of his name means “pledged to protect royal power” (p. 25). His story is also the story of the Thai state’s drive to establish law and order in the south over the course of the twentieth century. He entered the police academy in 1925 and began his policing career four years later (p. 35). This was the heyday of the police force, especially under the leadership of Police General Phao Siyanond, known in Thailand as the “father of Thailand’s modern police” (p. 97); internationally he was once called the “Iron Man of Asia” (p. 100). Reynold’s recounting of the career of “Khun Phan”, as he came to be popularly known, reminds us of the raw violence of this era which is too often hidden beneath the euphemisms of “nation-building” or “national integration”. Across his knuckles Khun Phan had tattooed the consonants of the word, “executioner” (p. 6). In one story, perhaps apocryphal, he engaged in personal combat with a bandit, finally overcoming him by standing on his genitals to pin him to the ground and strangling him to death (p. 42). In another incident, after shooting dead a bandit he had his head impaled on a stake and displayed outside the Phatthalung provincial police station (p. 54). Despite some concern over his “unsound” methods Khun Phan came to the attention of his superiors early in his career and was even awarded a noble title in 1931, one year before the end of the absolute monarchy (p. 43).

Power, Protection, and Magic is a welcome examination of a subject that is seriously understudied and poorly understood, Thailand’s rich tradition of magical lore. Reynolds argues that Khun Phan set out to master various forms of occult knowledge to offset the risks associated with the dangerous job of policing. His aim was to achieve the power of invulnerability (p. 7). He studied with monks at the cave monastery, Wat Khao Or, in Phatthalung province, known for the study of the magical arts, where the monks shared their knowledge with both bandits and the police. There Khun Phan underwent the initiation rites, derived from Brahmanical tradition, which included immersing himself in a special herbal bath for several days that supposedly toughened the skin to withstand knife blades and bullets (p. 39). How rationally minded modern people are to understand the widely accepted popular belief in the efficacy of magic is one of the themes of the book.

By the author’s own admission this book was written with a view to being as accessible as possible. Its readability disguises the fact that it is based on extensive research in both the Thai and international scholarly literature, supplemented by field interviews. The book is beautifully produced with full colour photos. Reynolds has also produced attractive and informative video clips of each of the chapters in the book filmed on site. URL links to the video content are included at the beginning of each chapter.

This book is vintage Reynolds. It will fascinate, astonish, and educate the reader about one of Southeast Asia’s least understood regions. Read it.