This book brilliantly contributes to expanding the borders of political theology beyond its Eurocentric  and Christian boundaries. Central to the emergence of political theology is Carl Schmitt, a Nazi jurist who argues that the political is intrinsically theological; the concepts of the modern state have their origins in theology. The anthology, however, adopts a non-linear perspective on the “mutual constitution of religion and secular politics.” The line of development is not always from religion to the secular but may also be the reverse, or even multi-directional (the local and the global, the pre-colonial/neo-colonial/postcolonial) and trans-confessional. While political theology in its inception was first developed in engagement with Christian discourses, the papers in this anthology converse with religious traditions in Asia such as Islam, Buddhism, Hinduism, and Animism.

The role of political theology in shaping development ideologies has begun to be appreciated and explored only recently. Development relates to a hope for the future; a “promised land” and thus links deeply to eschatology. The chapters explore development discourse with related theological themes of transcendence, sacrifice, aspiration and salvation.

Edoardo Siani and Eli Elinoff examines development discourse during and after the death of the deified monarch, King Bhumidol, referred to as ‘king of development, modernity, progress and democracy.’ In “Embodying the Late King: Buddhist Salvation and the Sacrifice of Sovereignty at a Bangkok Mall,” Siani probes into the public relations campaign at a mall, representing the late King as a “god of prosperity,” correlated with wealth, salvation, and neo-liberal capitalism. This was aimed at countering an emerging political theology of the people in the wake of King Bhumidol’s passing and consequent political vacuum.

In turn, Enoiff’s “From Blood, Cast in Cement: Materializing the Political in Thailand,” probes into how “things” such as blood and cement have become symbols in protests with competing notions of the political. Red blood signifies equality in sharing a common blood (a protest against the royal blood) and sacrifice (people’s willingness to spill blood in the name of democracy), whereas cement signifies the development the country has undergone under King Bhumidol, the moral capacities of the well-born, and the monarchical revival.

Likewise, Kenneth George focuses on “things” and their power to summon public debate and agency in his chapter on “The Theopolitics of Art: Qur’anic Objects and their Publics in Indonesia.” He analyses the use of two ‘things’ ̶  the Al Qur’an Mushaf Istiqlal and the bustier decorated with Arabic script from a passage from the Qur’an. A contestation between artists and religious experts ensued in both cases, with religious experts gaining the upper hand in legitimizing religio-cultural representations in art. Behind this however, was the hand of President Soeharto who was bent on getting the allegiance of the Muslim majority. 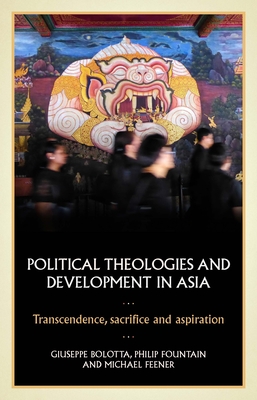 In the context of India, Sunila S. Kale and Christian Lee Novetzke’s “The Yogi Ethic and the Spirit of Development” retrieve yoga’s origin in the connection between war, the individual, and self-control, and thus as a “tool in the politics of social being.” The Yogi ethic underlines the role of sacrifice within a more sustainable development, and is thus important in our fight against neo-liberalism and climate change.

In contrast to the above chapters that focus on sacrifice in relation to development, individual survival has become the concern of the new citizen-subject that has emerged in South Korea.  In “Being Alone: The Political Theology of the Development Citizen,” Sam Han writes about the emerging lifestyle of living alone in South Korea, as an expression of an aspiration for personal instead of a communal salvation in the context of compressed modernity. Compressed modernity refers to the rapid development of East Asian Tigers, which occurred within 50 years in contrast to the 150 years it took for Western nations. The cultural trend of living alone paved the way to a new citizen-subject whose thrust is self-preservation in the midst of currently diminishing resources for existence.

Focusing on broader transnational spaces are the papers of Till Mostowlansky   and Armando Salvatore. Mostowlansky’s “Managing Karbala: Shi’a Humanitarianism in Pakistan, England, and Iraq” examines how Shi’a humanitarianism draws its spirit from the battle of Karbala, that saw the birth of Shi’ism as a separate Islamic identity.  The Spirit of Karbala that mourns human suffering and emphasizes the central role of sacrifice, permeates Shi’a humanitarianism that is concerned with all of humanity (including non-Muslims), and in this way, serve to counter fragmentation and foster political stability.

Lastly, the paper of Salvatore on “East of Wetphalia: Shaping the Body-Politic via Institutional Charisma,” focuses on the Islamicate in Western, Central, and South Asia, and its contributions to the development of the modern state, as a result of the influence of religious knowledge, symbols and charisma.

My only critique of this otherwise innovative anthology is the missing gender perspective. This cannot simply be addressed by adding one more chapter that focuses on gender; it is about making gender integral to the analytical framework in all the chapters. How has the marginalization of women in religion morphed in concepts of the body-politic and vice-versa?

To conclude, for those interested in political theology, interfaith dialogue, intercultural, and postcolonial theology, this anthology will not disappoint you. It provides rich insights and can certainly stimulate new theoretical and research trajectories!