Since independence, Myanmar has been in search of a political system to accommodate its rich cultural, linguistic, ethnic, and religious identities. Ethnic minorities have called for federalism as a way to ensure the equality and rights of all groups. However, under the highly centralized system imposed by the military dictatorships that controlled Myanmar from 1962 to 2010, any discussion of federalism was impossible. The political transition under the 2008 Constitution created a centralized form of federalism, but even under the National League for Democracy (NLD) government (2016-2021), the actual work and vision of Burmese government remained centralized.

After summarizing this history, this article focuses on the ways in which the 2021 coup fundamental altered the political debate on federalism. It considers how young ethnic minority leaders put federalism at the center of the demands of the anti-coup movement, and notes a shift in discourse around ethnicity: there is a move away from the previous focus on ethnic-genealogical models of federalism, and towards an inclusive civil-territorial model. It then considers the significance of the Committee Representing the Pyidaungsu Hluttaw (CRPH)’s abolition of the 2008 Constitution and adoption of a Federal Democracy Charter, Part I of which enshrines broad-minded federal principles. These developments and the acceptance of federalism as the political future of Myanmar show the success of efforts to provide federalism training over the past decade. However, deep, multi-faceted and multi-layered societal divides remain around ethnicity, geography, citizenship, and religion, among other cleavages. The current situation has not resolved these divides and united people overnight; there are still significant issues of trust. Moreover, practical negotiations, particularly on Part II of the Federal Democracy Charter will be needed to put into practice the values set out in Part I and establish a federal system. 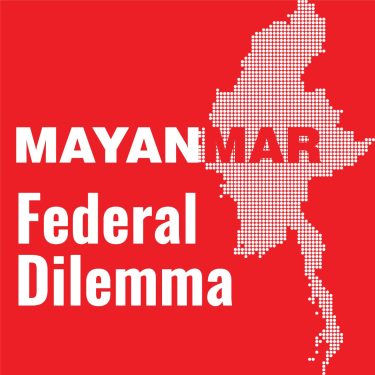 The Federal Dilemma in Myanmar

Myanmar is an immensely diverse country in ethnic, religious, linguistic, and cultural terms, but the Buddhist Bamar form the numeric majority and have traditionally dominated the government. Ethnic minority leaders (both from political parties and Ethnic Armed Organizations (EAOs)) have long seen federalism as a way to protect the rights and interests of their populations, including from exploitation or oppression by the Bamar, and to shift power from the central government to the state level. These calls for decentralization and federalism were rarely welcomed by national leaders. As early as 1959, Silverstein coined the term “federal dilemma” to describe the situation in which the leadership preferred a form of majoritarian democracy, but for political reasons had to allow a certain flavor of federalism for the ethnic minorities.

The military regimes that controlled Myanmar from 1962 to 2010 established a highly centralized system. As one of the justifications given for military rule was the need to prevent the breakup of Myanmar, federalism (which was seen as a possible step towards secession by ethnic states) was viewed with suspicion. With the political transition initiated in 2010, federalism ceased to be a taboo subject, but power nonetheless remained centralized under the 2008 Constitution.

Under the NLD government, as with previous administrations, the political elite remained divided on which political structures could provide the autonomy that ethnic minorities demanded, while not creating or exacerbating other problems. There were important concessions, however: negotiations around the peace process converged on the agreement that the future of Myanmar was as a federal state. Despite this, heated disagreements remained around terminology, in particular the difference between “federal democracy” and “democratic federal state”. This reflected the lack of trust among stakeholders, but also contributed to ethnic leaders’ perception that the NLD was prioritizing democratization over federalism.

Meanwhile, civil society organizations used the opportunities offered by the opening up of civil space following the political transition to carry out a wide range of educational activities on federalism, from town-hall style meetings to more tailored and advanced courses. This amplified the issue and secured its place in development discourse, as well as won over new advocates.

Federalism in the anti-coup movement and the GSC-N

Federalism was not at the forefront of political demands in the immediate aftermath of the coup on 1 February 2021. Early protests demanded the release of political leaders and the restoration of the democratically-elected government, but did not mention federalism. In other words, these protesters called for the reversal of the coup, but remained within the conceptual framework provided by the 2008 Constitution.

It was the General Strike Committee of Nationalities (GSC-N) that brought the political call for federal democracy into the anti-coup movement, as both a popular demand and an objective endorsed by the CRPH. The GSC-N is an alliance of youth networks, many of whom had been exposed to federalism and other concepts from the social sciences during the previous decade. Although most were Yangon-based, they were born in ethnic states, and have both personal and institutional connections with ethnic political parties and EAOs.  With this background, it is unsurprising that the GSC-N’s demands included the establishment of a federal democratic union, as well as collective leadership, equality and justice, mutual respect, and self-determination. These demands set the GSC-N apart from other protest groups, which focused on the release of prisoners and respect for the 2020 election result. As one GSC-N leader said, “we, the ethnic minorities, have deeper demands. Our vision is to establish a federal democratic union with all nationalities who belong in Myanmar.”  This vision proved popular, especially in ethnic States where protests were held in the name of the GSC-N and echoed their five demands.

The need for an inclusive imagination: a collective public apology

Traditionally, calls for federalism in Myanmar have envisaged an ethnic-genealogical model, with the creation of states for the ethnic minorities within which they form the majority, thus enabling them to preserve their own languages and cultures. As a result, questions of ethnicity and federalism have been closely linked. It is therefore interesting to note that the GSC-N also tried to redefine the conception and narrative of ethnicity in Myanmar.

Traditionally, the term “ethnicity” is equated with the Burmese “taìn-yìn-dhà”, which is understood as referring to only the 135 “national races” recognized by the state; it thus excludes other ethnic minorities such as ethnic Chinese and Rohingya. In order to distance themselves from the narrow definition evoked by “taìn-yìn-dhà”, the GSC-N called themselves “lu-myò-zoun” meaning “variety of lu-myò” (kinds of people). In their list of lu-myòs, they include “ka-byà” and “Myanmar Muslims”, neither of which were recognized as “taìn-yìn-dhà”.  In adopting the GSC-N’s name and principles, protesters across the country have also adopted this shift in the conception of ethnicity.

Meanwhile, witnessing the Myanmar military’s brutality firsthand led many people to reexamine their perceptions on the sufferings of ethnic minorities, including the Rohingya. Social media users have apologized for their past attitudes and expressed solidarity. For example, one said, “We will take lessons from all these events. From now on, for every human right violation and every injustice done to Rohingya taìn-yìn-dhà and others, regardless of geography, ethnicity and religion, we will object and fight for federal democracy union and for justice. We will continue our battle together with all taìn-yìn-dhà people of Myanmar”. Young people on social media also started to question the concept of ‘taìn-yìn-dhà’ and its use as the basis of an ethnic-genealogical model of federalism, instead arguing for a civic-territorial model. Meanwhile protesters on the streets called for non-discrimination on the grounds of ethnicity and religion. Thus, the call for federal democracy from the GSC-N and a public catharsis of apologies combined to become a strong popular demand for federal democracy.

CRPH and its young leadership

During discussions on forming a national unity government, the National Unity Consultative Council (NUCC) became a place for CRPH, ethnic political parties, and movement leaders to discuss the political situation and organize the new civilian government. In this context, CRPH members met with the GSC-N, who proposed that the CRPH show its commitment to federal democracy by abolishing the 2008 Constitution and signing a formal agreement endorsing the GSC-N’s principles. The GSC-N’s slogans also revived the debate on whether “federalism” or “democracy” should come first in the official political vocabulary. The wording “federal democracy” had gained public traction and was strongly supported by high level leaders, including ethnic minority political parties and EAOs.

Members of the CRPH were aware of the never-ending debates on vocabulary that had arisen during the peace process negotiations, and of their pressing need to form a united alliance. The CRPH therefore yielded to the demands of ethnic political groups and on March 5, formally adopted “federal democracy” as the official term.  At the same time, in an unprecedented political breakthrough, the CRPH departed from the NLD’s previous official policy of national reconciliation, and pledged that they would abolish the 2008 Constitution, replacing it with a federal constitution. To follow through on these promises, the NUCC drafted the Federal Democracy Charter, Part I of which sets out broad-minded federal principles, and the CRPH announced the abolition of the 2008 Constitution. As a legal advisor noted, this decision was driven by politics, rather than legal considerations.  Legally, it is odd to have removed the 2008 Constitution, which provides legal continuity and legitimacy as the elected government, and thus potential for international recognition.

Of course, there were concerns that CRPH’s concessions were just a way to please the public, rather than reflecting a real commitment to federal democracy. In other words, that this was a return to Silverstein’s “federal dilemma” and that like previous federal initiatives by Bamar political leaders, these would prove “cynical and expedient instead of sincere and consistent”. These concerns are heightened by the CRPH’s inheritance of the NLD’s political legacy, since the CRPH was formed mostly around NLD members, and has been endorsed by the NLD leadership. The CRPH is therefore reasonable seen as NLD-dominated (and consequently Bamar-dominated), leaving some suspicious that it may simply be a repackaging of its predecessor’s positions.  On the other hand, the CRPH was not formed by the top leadership of the NLD, supporting the view that its new and young leaders are genuine in their desire to see a federal Burma. In this respect, the apology from one CRPH member to Rohingya people was seen as an important indication of their attitude.

This article is an attempt to understand the development of the federalism debate in the post-transition years generally, but especially in the complex and complicated aftermath of the coup. While the anti-coup movement’s initial focus was on removing the military dictatorship, it rapidly shifted to the broader political goal of transforming the state’s structure, especially following the growing profile of the GSC-N and related social movements. Achieving this obviously requires removing the military junta. But as importantly, it requires a unified political leadership among anti-coup parties, which will come about only when deep-rooted grievances held by ethnic political parties are addressed, racism and prejudice reduced, and historic trust deficits overcome.

While this may seem an almost insurmountable obstacle, there has been a substantial shift in public attitudes, with people embracing not only the idea of federalism, but also increasingly looking towards a civic-territorial rather than an ethnic-genealogical model of federalism. This helped push the CRPH to commit to establishing a federal system and abolishing the 2008 Constitution. These are positive developments, even if they have not resolved the decades-long discussion of what form of federal system is best for Myanmar. In short, the coup has fundamentally transformed Myanmar’s deliberations on federalism and prompted constructive discussions around the issue of “taing-yin-dhà”, but the road to reforming the political system nonetheless remains long.