From 1991 to 1993, Niti Pawakapan, a well-known economic anthropologist, traveled to a town in Northern Thailand – known simply as Mueng Tai (Tai town), 1 and has returned twice each time after a decade. This book records his reflection on the situation in the town and also his memories of it. He went back to the town in 2001 to look into the effects of the economic crisis, and in 2010 to investigate the political fluctuation of the Tai people, especially selected local actors.

Based on these fieldtrips, his visits give rise to many interesting questions in the book. The most significant ones are regarding the interrelationships between culture and the economy. The book explains how religious culture affects three kinds of economic activities, namely: capital accumulation, redistribution, and trade. In addition to that, it can be interpreted from the book that economic development is also expected to change the culinary culture of the society.

Religious culture as an institution that supports economic development

While the book has positioned its argument parallel to Max Weber’s theory on the interaction of religious ideas and economic behaviour, it also offers details of a broadening and goes into detail in order to explain differences with the local situation. For Max Weber, the Protestant Reformation was more applicable with the extension of capitalism and industrialization than any other religions such as Catholicism. For Niti, however, religion, in the Weberian sense, was altered by Tai-style Buddhism in three aspects as follows:

According to Niti, Tai Buddhism encourages the local people to make social contributions, such as patronizing an ordination for poor family. However, nothing is for free and returns are always necessary. In this sense, they should be referred to as making merit (Tham-Bun) rather than unconditional charity. 2 The legend of Phra Upagupta confirms this argument. 3

Figure 1. Transcendental capital accumulation process through transmigration of the self

Figure 1 shows how people invest their present capital by contributing through religious activities and by so doing expect merit-return in the future (either in this life or next). Additionally, the concept of time in Buddhism, including Tai-style, is not linear but cyclical. Therefore, making merit is an unfinished project in infinite space and time. The term should be defined as a kind of transcendental capital accumulation. This inference resembles the work of Rachel McCleary (2007) that argues religious beliefs about the afterlife usually affect economic growth. Those who believe in Tai Buddhism can perpetually accumulate their wealth and bring them to the next cycle of life. They tend to work hard, save more physical and abstract capital, and look-forward to long-tenure outcomes. 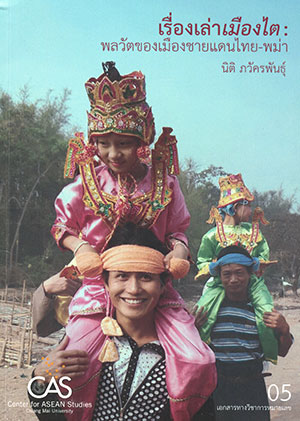 Under Tai Buddhism institution, ordinary people cannot make generous merit alone, such as to a temple, because of their limited merit endowment from their former life (Niti 2015: 71-72). Thus, like the phenomenon of capitalism, they have inadequate transcendental capital to receive a large merit-return. No lender can provide credit for merit-makers. To solve this problem, local Buddhism suggests that people should communally contribute for merit.

Collective merit making, especially for the ceremony of novice investiture, which local people know as Poi-Sanglong and Poi-Lookaew, is expensive (Niti 2015: 65). The rite only occurs when people across socio-economic level (the haves and the have nots) come together and cooperate. This cooperation includes not only short-run ritual collaboration, but also long-run commitment to be the same parentage because each novice will call the patrons as dad or mom 4 and they should support him as their son. This ritual should be treated as a kind of redistributive process in which the wealth of the rich and the poor are partially blended together. Moreover, the opportunity for an ordination results in the education of the novice and monk by teaching them the official and local languages. (Niti 2015: 67). In this sense, the human capital of the have nots is increased by the involvement of the haves in the ritual.

As nothing is for free, the haves do not redistribute their wealth to the have nots because they have unconditional care for marginalized people, but they expect to gain from merit-transference (Niti 2015; 73). To explain this concept, Niti refers to an old manuscript, อานิสงส์บวช Arnisong-buad (Returns from an Ordination) – once investigated by Charles Keynes (1967 -1968). The text shows how rich patrons gained merit return equal to that of the poor novice’s parents. The merit should be considered as an immaterial common property of vertical integrated social groups because the cumulative capital of each individual grows together and is transferable. Therefore, social capital also strengthens rather than contradicts.

3. Trade Facilitation between Temple and Some Local Actors

One may consider a religious organization, like a temple, as sterilized from secular benefits. However, Niti demonstrates that this assumption is not true. He observes how a local actor, Chit, and his family members are active as the major influential group, particularly in Tai religious activities. Typically, when Chit’s group makes merit by providing rice and other resources to the temple where one of his relatives is the abbot, others will follow and jointly contribute. After a religious event, surplus resources such as rice stock become substantial because of the limited consumption of monks and novices. Frequently, the surplus stock is resold at a lower price to a specific rice-mill which is owned by Chit. 5 The “cycle” indicates that Chit as a major contributor does not only gain merit-return, but also seeks real profit.

Based on these findings, I conclude that religious culture (i.e., myths, believes, and traditions) as an institution incentivizes Tai society to fit the characteristics of capitalism and modern economic development. It endorses the concept of capital accumulation either in physical or transcendental forms. It also encourages the haves to redistribute their wealth to the have nots by merit transference. The temple, as an organized unit of religious institution, is not completely separate from secular trade. It often acts as a market (i.e., exchanging between present capital and ex ante merits) where the abbot serves as trade facilitator.

Niti describes when he returned to the town in 2001, he discovered that majority of the locals used gas stoves instead of charcoal for cooking as he had seen earlier on his first trip in 1991-1993. Niti asked the following questions:

Niti: Why do you prefer to use gas than charcoal?

Locals (couple): We prefer to use gas because life has changed. It is too rushed. We must engage in farming and trading hastily. 6

How to understand this change? The conceptual clock of the locals was modified during a short-tenure by a “mysterious” factor, although the determinant of change has no direct answer. I assume that economic development potentially increases the opportunity cost of leisure time and unproductive time-wasting. Stoking a charcoal brazier is time consuming and so, locals prefer to use gas for cooking. Aside from that, the change in culinary culture is related to the introduction of the installment system in 1990.

Before 1990, the old conceptual clock of Tai people was driven by seasonal effects. When they farmed in the rainy season, income was returned quarterly rather than monthly. The passage of time depended on inconsistent income. After 1990, however, there was a change to where people could pay their debts by installment. The basic logic of installment payments is to divide the entire debt into a specific portion of money and duration of time. Time has a price tag and rhythms. It rapidly forces Tai people to synchronize their conceptual clock and haste at work. Thus, people started using gas stoves and to free excess time and work hastily. 7

From the economics perspective, the story of Tai town has many intersectional issues that are interesting to discuss. This review is written with the intention to discuss Niti’s argument – while he may disagree with my interpretation, but it will help readers understand the changes that have been taking place.