This book consists of six notes of fieldwork experience by third-generation Korean scholars on Southeast Asian studies during their Ph.D. years, that were conducted from mid-1990s to early 2000s. They are namely: Kim Hyung-jun on Islamic culture of ordinary town in Java, Indonesia (anthropology), Hong Seok-joon on Islam in a farming village in Malaysia (anthropology), Hwang In-won on dynamic of power politics among political elites in Malaysia (political science), Chae Su-hong on factory workers’ resistance, daily life and culture in Ho Chi Minh city, Vietnam (anthropology), Jeon Je-Seong on labor movement in Indonesia (political science), and Lee Sang- Kook on transnational social space between the border of Thailand and Myanmar (anthropology). Although there are differences in the field studies in terms of themes, time and geopolitical space, in this book they describe common issues, such as: preparations of the fieldwork, learning national/local languages, fund rising, finding the relevant research field, building contacts with the locals, overcoming ethnocentrism to gain the locals’ point of view, and in their endeavour to clarifying the universality of area studies.

All the authors honestly acknowledge that they were beginners in the early stage of their research on Southeast Asia. They started with their own ignorance. Hwang In-won admits “among the teaching staff and colleagues in the department, I was the only person who did not have local language skills and field experience in Southeast Asia (p.174).” Similarly, Hong Seok-joon notes that “Malaysia was an unknown world to me. What I only knew about Malaysia was it was one of the undeveloped countries with tropical rainforest or the country that has the Merdeka soccer stadium (p.93).” Kim Hyung-jun also flashes back to his early years of Ph.D. study and says that “there were few students who could not involve in discussions about cow issues [in Indonesia] and I was undoubtedly one of them…. this was due to the lack of knowledge about Indonesia (p27-28).” Nonetheless, without any pretentions, each of them had a genuine interest on the research subject. Their lack of knowledge did not stop them to pursue beyond their limits of ignorance and and to build a better understanding – at least for themselves.

Interestingly, in their efforts to reach that objective, they highlight the importance of first hand experiences with the locals – regardless of the culture shock and different climate and language usage they encountered at first. Hong Seok-Joon, for example, notes his first experience in tasting the budu (anchovy-based sauce; a regional speciality in Kelatan). Similarly, Chae Su-hong had a salad that is mixed with bat’s blood and fetal duck egg. Beside that, they also note the importance of participating in various voluntary activities with the locals that enabled them to breakthrough cultural barriers and build connections with potential informants in the field. For instance, Kim Hyung-Jun was assisting in agricultural work (such as taking up farming, selling products at market, and raising a goat, etc.) not only to gain experience per se but also to build trust with the local community. Chae Su-Hong learned about factory work by sharing life with the workers and having lunch together and drinking liquor at night with them. Lee Sang-Kook participated in football games and a marathon during his fieldwork. Jeon Je-Seong and Hwang In-Won spent a lot of time at local NGO offices every day, not merely to obtain new updates, but more importantly, to build friendship with the NGO activists. As such, they could build a belonging to the local society as they were accepted and thus could initiate their research works.

Beyond these experiences in daily life, they also discuss the issues of position as a foreign researcher in the field. Chae Su-Hong notes that he had to maintain neutrality between Korean managers and Vietnamese factory workers due to the fact of his position as a Korean researcher. For him, maintaining the balance between two different groups (i.e., Korean employers and Vietnamese workers) was an important task for his research on the factory workers’ resistance in daily life. On the other hand, Jeon Je-Seong and Hwang In-Won shared a common standing on their research subjects – Jeon on labor movement and Hwang on power politics, respectively – that disclosure of one’s political opinion on research issue is crucial for conducting research, rather than maintaining neutrality. In addition to this, Lee Sang-Kook points out the importance of gender sensitivity in the field by introducing the case of refugee womans’ stories that could be obtained through his wife. From here we could see how each author has established different approaches with their research subjects based on their own personal experiences during the fieldwork. 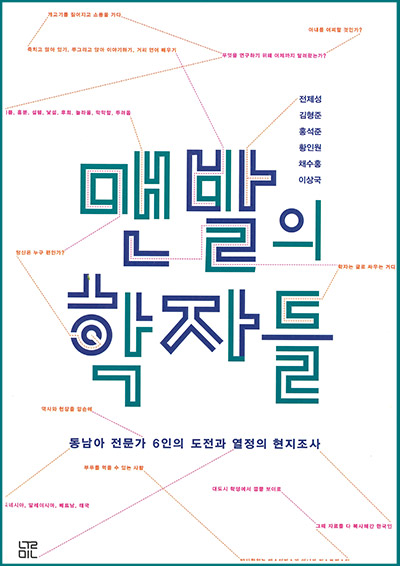 The title of the book, “Barefoot scholars” indicates their fieldwork as an important experience that has shaped their scholarship. Jeon Je-Seong notes that “fieldwork gave birth to a new me (p.406).” I think fieldwork experience is a critical turn in scholarship, especially in the Korean context, to understand the local society. It is not merely a rite of passage for beginners, but also a source of inspiration (and reflection) for studying Southeast Asia, as noted by Benedict Anderson (1996). Armchair scholarship that had characterized first-generation scholars is no longer enough. Therefore, this book illustrates the process of becoming a researcher and also, offers a more nuanced understanding based on fieldwork.

I think this book is useful for those who are interested in area studies and Southeast Asian studies, with emphasis on qualitative research methods in the field. I learned that experiences in overcoming obstacles during the fieldwork enables one to understand the meaning of becoming a researcher. For this reason, I think a ‘realistic experience’ during fieldwork is much more important rather than ‘successful stories’ that were produced by well-trained researchers for their readers. Jeon Je-Seong leaves an important message about the aim of this book, saying that “through our stories that were addressed without hiding regrets and mistakes in the field, future generations of academia who wish to involve in area studies can undertake well prepared fieldwork better than we did (p.7).” This message encourages young scholars to step out of their comfort zones, not hesitates to live and befriend with the local society, and dare to challenge their senior scholars in their scholarship to push beyond their limiting understanding and approaches. I personally expect the authors’ frank notes on fieldwork may become to be regarded as a cornerstone for better a understanding of Southeast Asia.