The study of traditional Islamic institutions in Southern Thailand has not received much systematic and scholarly attention. Institutions such as the pondok (private Islamic boarding schools) are historically important to the Malay-Muslim community in Thailand. They perform a key role in providing religious instruction and also in deepening the community’s understanding of Islam. Moreover, they are closely associated with Malay-Muslim identity and often act as a pivot for Malay social life. Hasan Madmarn’s study of the pondok andmadrasah in Patani is a valuable contribution to the literature on traditional Islamic institutions. In particular, he offers fascinating insight into the workings of the traditional pondok and its influential role in Patani society.

From about 1782, the Siamese monarchy began gradually to extend its influence over the Kingdom of Patani. Patani was then divided into seven administrative areas, each under the control of a Siamese-appointed chief. In the 1890s, King Chulalongkorn’s reforms creating a centralized administration undermined the power and influence of the Muslim rulers further, leading by the early twentieth century to direct control by the Siamese authority. However, Siamese officials spoke little if any Malay and governed from the towns, while the Malays generally stayed in the countryside and found security and sanctuary in their religion and culture. Today, Malay-Muslims form the majority in the four southern Thai provinces of Pattani, Narathiwat, Satun, and Yala, but make up a small minority in the country as a whole.

In the 1930s and 1940s, attempts by the Phibun government to assimilate ethnic minorities into national life had a direct impact on the Muslim community in the South. Malay-Muslims protested at the assimilation measures and there emerged growing dissatisfaction, especially among the young. This resulted in a determined attempt to revive Malay identity and raise the level of Islamic consciousness. Religious institutions such as the pondok were used to disseminate ideas of Pan-Malay nationalism and Islamic revivalism.

Hasan Madmarn’s monograph highlights some of these issues. He draws attention to the historical importance of Greater Patani as a center of Islamic learning and to the various responses of the pondok to government policies intended to modernize them. He also discusses the adjustments made by providers of religious education in Pattani province in the last few decades. 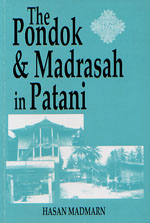 Hasan begins his study with the role of Patani as an independent Malay-Muslim kingdom in the seventeenth and eighteenth centuries. The Patani religious scholars, the ulama, offered Islamic classical education to keen students through the pondok, providing both basic and advanced courses in Malay and Arabic. Hasan gives a detailed and excellent evaluation of Patani’s religious scholars in the nineteenth and early twentieth centuries, highlighting their contribution to the writing of important religious commentaries and to translation from Arabic into Malay, written in the Jawi script. Many of the ulama, such as Shaykh Dawud al-Fatani and Shaykh Ahmad al-Fatani, distinguished themselves in the religious centers of the Middle East in the nineteenth century and were connected to networks of religious scholars within the Malay and wider Muslim world. The Holy Mosque at Mecca (Masjid al-Haram) became a much sought-after destination for graduates of the Patani pondok. Hasan also stresses the importance of the Malay language in religious instruction, maintaining that much of the literature used for religious instruction was in Malay, the students’ own language.

In his study of the pondok, Hasan examines the role of Chana, a town in Songkhla province, from the 1930s to the 1950s. Chana had four major and highly regarded pondok whose reputation enabled them to attract students from all over Thailand and British Malaya. The ulama of these pondok belonged to the Kaum Tua, or traditional school, which favored “all that was traditional, unchanging and secure” (p.18). The traditional pondok system of learning is narrowly based and “medieval” at best (p.21). There is no system of assessment and students learn by rote and by taking down commentaries and explanations given by their religious teachers. As in other parts of the peninsula, the Kaum Tua came into conflict with the proponents of modernist reform, called the Kaum Muda. Hasan mentions Tok Guru Ghani, a leading member of the Kaum Muda group, who introduced the modern madrasah into the traditional system of religious instruction represented by the pondok.

In contrast to the pondok’s exclusive focus on religion, the madrasah curriculum is broadly based, emphasizes knowledge application, and has a relatively vigorous system of assessment. The madrasah is often modeled on similar schools found in the Middle East. Here it would have been useful for Hasan to discuss the relative popularity of madrasah and pondok schools before the 1960s, but he does not provide information on enrolment for these two types of institutions. More attention is given to the ulama of Patani, the mainstay of the pondok system, than to the proponents of the madrasah system.

Neither does he cover in much detail the impact of Thai government policies to upgrade and introduce secular subjects into the pondokschools in the early 1960s. This program entailed the registration of all pondok with the Ministry of Education and was aimed at transforming them into private schools subject to government regulation. This inevitably resulted in a new conception of the pondok as an educational rather than a religious institution. By 1971, 400 pondok had been registered and have survived as “private schools.” Hasan mentions the concern of religious teachers when Islam came “under government control” (p.74), but offers little evidence of resistance against the registration policy that made it compulsory for the pondok to use Thai as one of the languages of instruction.

The fears of religious teachers were confirmed by the 1987 policy extending compulsory education from six to nine years. Religious teachers at this time publicly opposed the policy because it would limit the time Muslim children could spend in religious schools. Another response to government reform was the attempt to transform pondok into madrasah. This would allow religious teachers to modernize their curriculum and include the objectives of the Thai educational system while preserving the tradition of Islamic learning associated with the pondok.

The Thai government, meanwhile, provided incentives to Muslim children to remain in public education by encouraging the teaching of Islam in elementary schools, a move that was received positively. (There was also an attempt to upgrade the standard of teaching and the curriculum of Islamic private schools, the post-registration pondok schools.) In time, Islamic subjects were introduced at the secondary level of public schools, and eventually, the Education Ministry established the College of Islamic Studies at the Prince of Songkhla University. This allowed students to pursue Islamic studies in Thailand at the tertiary level for the first time.

While Hasan has done a commendable study on the institution of the pondok, giving adequate attention to the curriculum and the learning process, and highlighting the contributions of religious scholars, he has not addressed the role of religious institutions within the broader context of political change in the Southern provinces. For example, there is no discussion of allegations that the separatist movement in Southern Thailand has used pondok as recruitment centers. Without exaggerating the importance of separatist demands, it may be worthwhile to underline the terms by which the Muslim community has tried to negotiate its integration into mainstream Thai political and social life. Education continues to serve as an important key to integration and development, as most pondok have been transformed into private Islamic schools under the government’s jurisdiction.

The competition for students between traditional, private Islamic schools and government-run public secular schools that include Islamic subject matter is also a pertinent issue not carefully examined here. At question is whether the pondok can adapt to conform to the Thai national educational curriculum and continue to exist alongside secular schools. Certainly, the pondok is under increasing pressure to redefine its role in Thai Muslim society.