This is the first book in Korean that exclusively introduces the academic life of Benedict Anderson. As we know, Anderson “was born in China, grew up in three different countries, carried an Irish passport, and was absorbed in Southeast Asia while living in the U.S.” (p. viii). In this book, Suh Jiwon presents ten key words to relate his academic journey: Youth (Pemuda), Imagined Communities, Print Capitalism, Official Nationalism, Long-distance Nationalism, October 1, 1965, The Idea of Power in Javanese Culture, Cacique Democracy, The First Filipino, and Anarchism. It is worth to note that Suh translates into Korean Anderson’s Under the Three Flags: Anarchism and the Anti-Colonial Imagination (2009, published by Ghil Publisher) and Imagined Communities (2018, published by Ghil Publisher).

The book starts with a description of Anderson’s fieldwork as a graduate student. As the young man Anderson conducted research on youth politics in Indonesia in the early 1960s. He found freedom, equality, brotherhood, and solidarity in the land of Java. The contents regarding his research on Java in the age of revolution were clearly summarized and presented in this book.

In chapter 2, “Imagined Communities”, Suh discussed how Anderson’s concept has shaped our understanding of the modern nation-state. She explains the concept clearly and contextualizes it with our contemporary world. 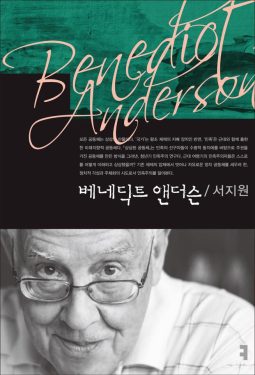 The following two chapters, chapter 3 on print capitalism and chapter 4 on official nationalism, are part of Anderson’s concept of “imagined communities”. They show how language(s) play an important role of promoting the fundamental and natural unity that makes nationalist imagination feasible and arouses nationalist emotions. Suh guides us through chapters 3 and 4 how a nation, as suggested by Anderson, was imagined and came to reality. Following that, in chapter 5, “Long-distance Nationalism”, Suh reminds us that Anderson has discussed the risks of politics of identity in nationalism.

Chapter 6, October 1, 1965, presents Anderson’s analysis of the event that took place in Indonesia following the coup in 1965. With this key word, she points out in detail that Anderson was the first scholar who explored the truth on the event, and how he revealed the propaganda of Indonesia’s military authorities that distorted the history. To date, the “Cornell Paper” he co-authored with Ruth McVey and Fred is still an important study on the event. As we know, Anderson was banned to enter Indonesia since 1972. Partly because of that, Anderson went deeper to history. One of his important contributions is his discussion on the idea of power in Java.

In chapter 7, Suh discusses how Anderson relates that Javanese culture accepts and tolerates norms and ideas in conflict with one another as well as various behavior patterns, and that it recognizes the co-existence of many different values. For Anderson, it is important to understand the Javanese idea of power to help analyze post-colonial Indonesian politics. As Suh shows the research findings of Anderson were connected other research topics of his own, this book leads students to comparative analysis, a method that Anderson pioneered in Southeast Asian Studies through his engaging research on three different countries: Indonesia, Thailand and the Philippines.

After his entry into Indonesia was denied, Anderson’s research interest expanded to Thailand and the Philippines. Chapter 8 presents his research contributions on the political studies of these two countries. Suh notes that Anderson experienced the democratization of Thailand in the 1970s and the ‘people power’ democratization of the Philippines in 1986 (p. 64). He recognized that the electoral systems of these two countries were related to a deeper issue than representativeness.

In the Philippines, hacienda owners occupy the majority of offices in the parliament that Anderson introduced the term “cacique democracy”. In Thailand, the U.S. army utilized Thailand as its base for Vietnam War in the 1960s. With American assistance and investment during that period, the bourgeoisie class grew and became the political ruling class after the democratization, that Anderson introduced the “American period”.

The last chapter of the book introduces Anderson’s Under the Three Flags: Anarchism and the Anti-Colonial Imagination and The Spectre of Comparisons: Nationalism, Southeast Asia, and the World. It points out the osition and characteristics of nationalism in various parts of the world as according to Anderson. He asserted that political activists who started to imagine newspapers, printing markets, and nations are belonged to the world of seriality bound with universal persuasiveness. With this chapter, Suh highlights the later stage of Anderson’s academic life. He kept making Southeast Asia and its people as important research subject where various ideas and actions meet, collide, and transform the world we live in today.

Readers could notice that Suh has read thoroughly all books that Anderson wrote. The contents of the book are connected to one another, and every corner of the text represents her respect toward Anderson. In introducing Anderson’s academic life, Suh uses wonderful sentences, metaphors, and descriptions, which are so attractive (although this charm is revealed only to Korean readers). As such, the book is not limited to providing academic materials regarding Benedict Anderson’s academic life and research accomplishments, it also helps scholars hoping to explore the region of Southeast Asia to meditate on their attitudes, methods, and approach to the theme that they will work on. It makes an interesting reading for students of Southeast Asian Studies and general readers, as well.