Can Islam, a religion revealed in 6th century Arabia, be compatible with democracy, a product of the modern “West”? There has been a surge of debate throughout the world on this issue, but no consensus. Indeed, the very concept of democracy is hotly contested, with countries as varied as Turkey, the United States, and Israel calling themselves democracies. It should be no surprise that many people asking this question are Muslims living in the Muslim world.

In Malaysia, the opposition Islamist party PAS claims to pursue its vision of an Islamic state through the “democratic process,” that is, at the ballot box. If this is a superficial definition of “democracy,” it is not entirely PAS’s fault. In the modern state of Malaysia, democracy has primarily been defined as a functioning electoral system. Opposition candidates do win seats in the federal Parliament and state assemblies. However, more than one observer has called this merely a well-oiled electocracy.

Where does real democracy begin? Can Islam, by virtue of being complete and perfect, embody democracy? Strangely, both fundamentalist and modern reformist Muslims assert with equal conviction that it can. But given the importance of peace, unity, and understanding within multi-ethnic, -religious, and -gendered national borders, do we really want to assign the State a religion? A living democracy should contain the constitutional and legal means to seriously disagree, yet theocratic states seem especially fearful of such freedom of debate.

Examination of this fear is the strength of Fatima Mernissi’s 1992 book about the Arab-Islamic world, published shortly after the end of the first Gulf War. Mernissi introduces spatial and linguistic dimensions of Muslim fear of the Other, of concepts and societies deemed “unIslamic,” by re-examining accepted interpretations of Islamic concepts. For example, many Muslims view the “hijab” as pertaining solely to women’s dress. But Mernissi translates the then recently-discarded “Iron Curtain” into Arabic as “al-hijab al-hadidi,” arguing that “the word ‘curtain’ in the sense of something that divides space to impede traffic, is precisely ‘hijab.’”

Mernissi connects men’s moralizing obsession with women’s dress to an overall political superstructure that can only defend itself by sequestering half its population from the public space. She proposes that this logic was severely undermined by the Gulf War. How could these methods of sequestering society continue to work when the borders themselves have been trespassed and broken by western armies and western technology?

In another of her many elegant passages, she tells us that the Arabic words for west and foreign are “gharb” and “gharib.” Thus, “‘Foreignness’ in Arabic has a very strong spatial connotation, for gharb is the place where the sun sets and where darkness awaits… it is there that gharaba (strangeness) has taken up its abode.” 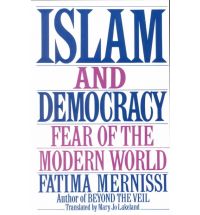 Mernissi skillfully aligns all of her arguments behind her main contention: “Identifying democracy as a Western malady, decking it out in the chador of foreignness, is a strategic operation worth millions of petrodollars. This little book will have attained its objective if it succeeds in suggesting some of the techniques used in this operation, including manipulation of fears by pasting ancient anxieties onto modern ones.”

Besides its fear of the foreign West, Mernissi explores the Muslim world’s fear of Islamic religious authority (the imam), democracy, the United Nations Charter, freedom of thought, and individualism. To explain the ascendence of terrorist imams and political Islam, she makes the distinction between the “media imam” (a modern creation) and the “traditional imam” (a reality during the time of the Prophet). The “media imam” uses modern technology to magnify his presence and bulldoze his rhetoric over the many complex debates in which the community could potentially participate. In contrast, the “traditional imam” was vulnerable and quite challengeable if he failed to secure the rights of each individual in society. In promising to “act like an imam, the modern politician mobilizes fifteen centuries of hopes.”

Mernissi makes it clear that she is addressing the experience of the Arabic-speaking Muslim world. But in Malaysia, too, we have politicians blurring the lines between politics and religion, despite the complication of a sizable non-Muslim electorate. This could be due to the pervasive Arabization of Islam in Malaysia. But another important factor is how the authorities have obstructed the circulation of opinions and accounts of Islam that contradict those officially sanctioned. While Malaysia is not a fundamentalist Islamic state, Malaysians can empathize with Mernissi’s characterization of them: “not only are the fundamentalist states, which base their political legitimacy on the past, not committed to understanding Islamic history; they also censor the books that try to clarify it.”

Because her book was written shortly after the first Gulf War, Mernissi spends some time dissecting the military-industrial complex in both industrialized western countries and Arab-Muslim countries. Her analysis suggests that the West spends most of its money subsidizing research that advances its military sector while developing skills and expertise that have spillover effects in society. Arab countries, however, use their massive petroleum revenues passively, simply to consume these products. Doing little to educate its citizens, the Arab countries fail to develop intellectual capital and remain technologically inferior to the West.

In this the militarized Arab world differs from the experience of Malaysia. While our government does spend quite a bit in proportion to GDP on military inventory, Malaysia is not a military state. Successive governments have also placed a high priority on education, sending Malaysian students overseas to pursue tertiary education in a variety of technical and scientific fields. Citizens here do not feel inferior to the West, believing that we will “catch up” soon, in our own way. But Malaysians are still unable to participate fully in public discourse – integral to a functioning democracy – because of the many parliamentary laws that restrict public expression. These laws are upheld by our police force, leading one Malaysian commentator to quip that we do not have to worry about becoming a military state, because we are already a police state.

Yet many Muslims (and non-Muslims, too) view Malaysia as a model Islamic country due to our level of technological development. They marvel at the government’s effective strategies in encouraging the pursuit of knowledge, especially in the fields of information and communications technology. But the Malaysian government is not as supportive of the pursuit of imagination. The arts and letters do not occupy the front seat of any government initiative to develop society.

It is interesting that Mernissi sees this, too: “It is imagination, and the irreducible sovereignty of the individual which engender disequilibrium and tension. A Galileo challenging the authority of Islam must be not a scientist but an essayist or novelist, a Salman Rushdie, and exploration of the psyche will surely be the arena of all future sedition

Mernissi does not dismiss Muslims who fear democracy and freedom. She takes great pains to make it clear that fundamentalists are in a complicated situation that stems from a need to be included: “The clamor of the fundamentalist youth of today is, among other things, an appeal to that Islam of rahma, where the wealthy of the cities are sensitive to the anguish of the poor. Their outcry is the plaint of the unloved child of the family cut off from modern knowledge and its sciences that promise work and dignity. Reducing the outcry of the young to a declaration of war against the wealthy of the planet – that is, against the West – is to make a serious error in understanding their anguish.”

In Malaysia, the government’s poverty eradication schemes have been much more aggressively pursued than in the Arab-Muslim world and have arguably had more success than in other developing countries. We have, indeed, a sizable Malay-Muslim middle class. For that reason, Malaysia’s experience calls into question the role of poverty in promoting fundamentalism. Speak to a cross-section of Malaysian Muslims and one realizes it is not the rural poor, but the professional, even Western-educated who most prominently seek an Islamic state. Many are members of the political opposition who adopt the language of “progressive” Islam and democracy without revealing what it means. One gets the feeling that this party, though opposed to the current administration, is not really opposed to the overall leadership structure of the country. One feels that Malaysian Islamists would be even more repressive than the current government, as in many Arab-Muslim countries.

Mernissi argues that Islamic societies have always seen tension between authoritarian rulers and disenchanted citizens, and each camp uses “Islam” to undermine the other. Mernissi calls for an awareness and critique of our past as Muslims to help us move forward and offers one possible solution: “Islam doesn’t reject anything; it manages all things. Its ideal schema is equilibrium.” Thus, whatever we discover, whatever we want to say, whatever we think as Muslims, we will always be within our rights because sensitive application of the principles of our faith will ensure the equilibrium of society.

But more than ten years on, is Mernissi’s book still valid? She did not foresee the sheer force of the Osama bin Ladens – people who are radically entrenched in the demonization of the Other, who employ dangerous methods in pursuing their ambitions. She did not foresee the acceleration of the United States’ imperialist advance, invading not one but two Muslim countries within two years, and its willingness to resort to equally deplorable measures in pursuing its global ambitions. But she has presented compelling arguments that are still urgently worth debating.

It is up to Muslims today to read more, think seriously, and not be afraid when we see the very things we abhor about the Other, the foreign (or not-so-foreign?) West reflected in the mirror right back at us. Ultimately, it is not the mullahs or the West we should fear, but our own minds. Not what will happen if we free our minds, but what will happen if we don’t.